A new home for tortured bears

The bear bile trade has been officially banned in Vietnam since 2005. However, due to a lack of available animal-friendly facilities, the Asian black bears and Sun bears remain on the farms - where they are still used for illegal extraction of bile. To put an end to this cruel practice, we support our partner organization Free The Bears (FTB) to build a bear-friendly conservation centre in the Cát Tiên National Park.

Despite the ban, it is estimated that between 700 and 1,000 Asian black bears and Sun bears still live a desolate and painful life on the former bear bile farms. While some operators continue to use the bears and illegally extract and sell bile, others simply find it no longer financially profitable to provide them with even the barest necessities and either leave the animals behind in narrow cages, without food and water or just kill them.

Anyone who has been to Vietnam before, knows how easy it is to obtain bear bile. Many shops still sell the substance on the quiet. According to the law, all existing bile bear farms had to be shut, however, the operators are allowed to keep the animals as “pets” as there are not enough places for the bears to go. This results in bile still being sold to locals and tourists. The product is used in traditional Chinese medicine (TCM) and people believe that the bile improves eye and liver conditions. Bear bile contains ursodeoxycholic acid, which indeed helps against gallstones and liver diseases. Nevertheless, there are actually plant-based alternatives as well as synthetically produced ursodeoxycholic acid that is being used in western medicine successfully, thus making the extraction of the bile from the bears redundant. At the moment, there are 54 known plant-based alternatives. Beyond that, due to the terrible state of health of the bears, bear bile might potentially be harmful to the human body.

A day in the life of a “bile bear”

The bears are confined in an extremely narrow cage and farm operators extract the bile of the bears under atrocious conditions. The constant physical burden of this procedure and the poor environment the animals are being held in, lead to physical harm, such as limb and dental injuries, malnutrition and liver cancer. In addition, bears often develop chronic behavioural disorders: The bears bite their own paws and chew on the bars of their cage.

One of the few possible housing options for rescued bears has previously been the state-run “Cát Tiên Bear Rescue Centre” in the southern Vietnamese Cát Tiên National Park. Initially created to hold 16 bears, the number of animals living there quickly rose to 36 animals. Providing bear-appropriate housing became increasingly difficult, which is why our partner organisation Free The Bears began the construction of a completely new and bigger facility a few kilometres away.  By the end of 2017, 28 animals – 16 Asian black bears and 10 Sun bears – had already moved from the old housing into the new “bear houses” with attached spacious enclosures. The other bears are staying in the old familiar environment of Cát Tiên Bear Rescue Centre for the time being, as they now have enough space to live there comfortably. Additional bears, that have been rescued from private households, were also placed in the new rescue centre in the third newly build “bear house”. 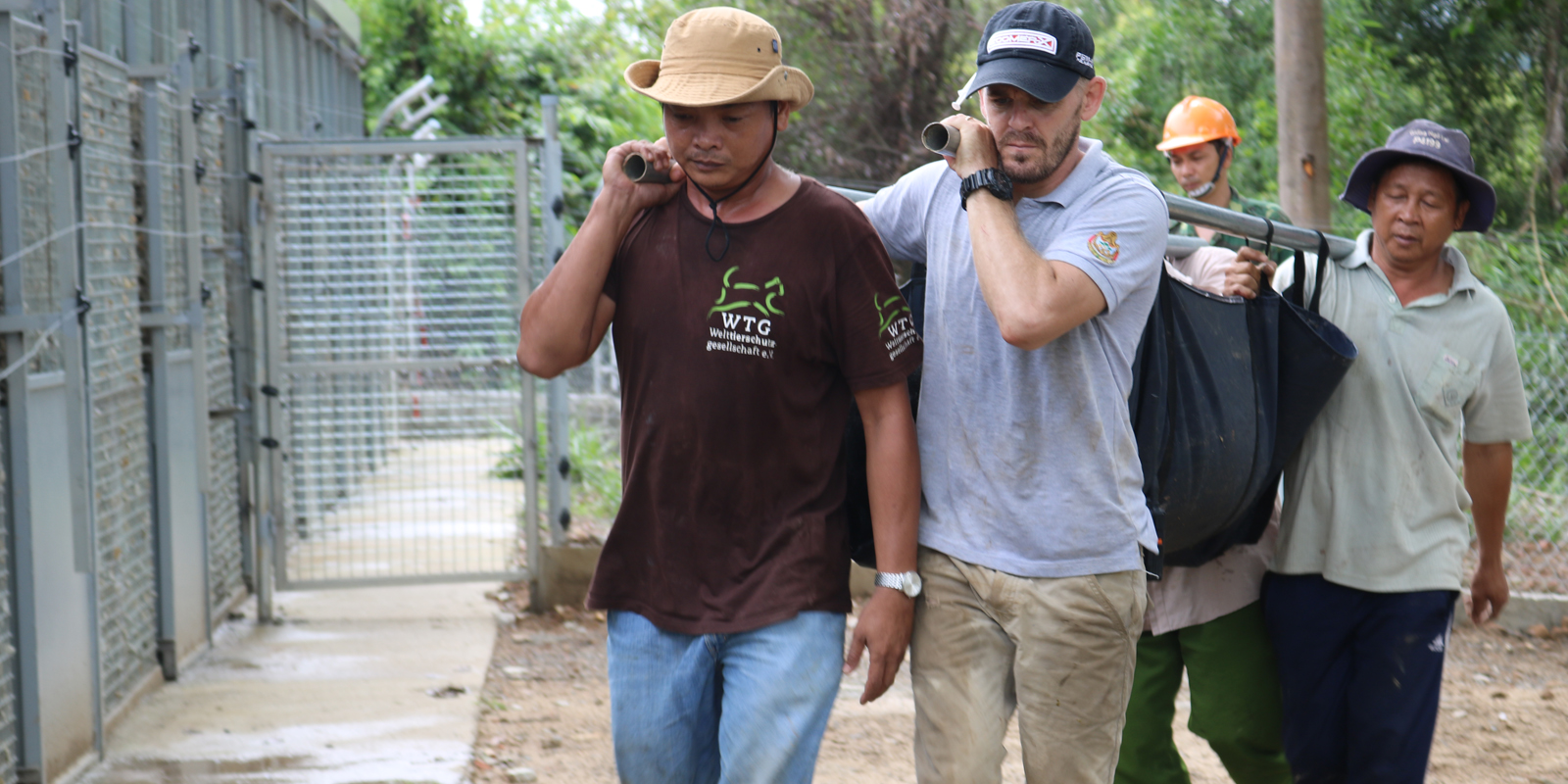 Releasing the animals into the wild is not possible, as they are not able to survive in nature. In the rescue centre, these animals find a shelter for life with bear-appropriate feed and veterinary care – and the opportunity to lead a safe life in their natural habitat. This goal in mind, together with the FTB, we are planning to build four more forest enclosures that spread over a total area of one hectare. The enclosures will be equipped with various enrichment such as climbing towers, hammocks and bathing spots. Trees and bushes let the animals re-discover and display their natural behaviours, but also allow them to retract and hide when wanting privacy. 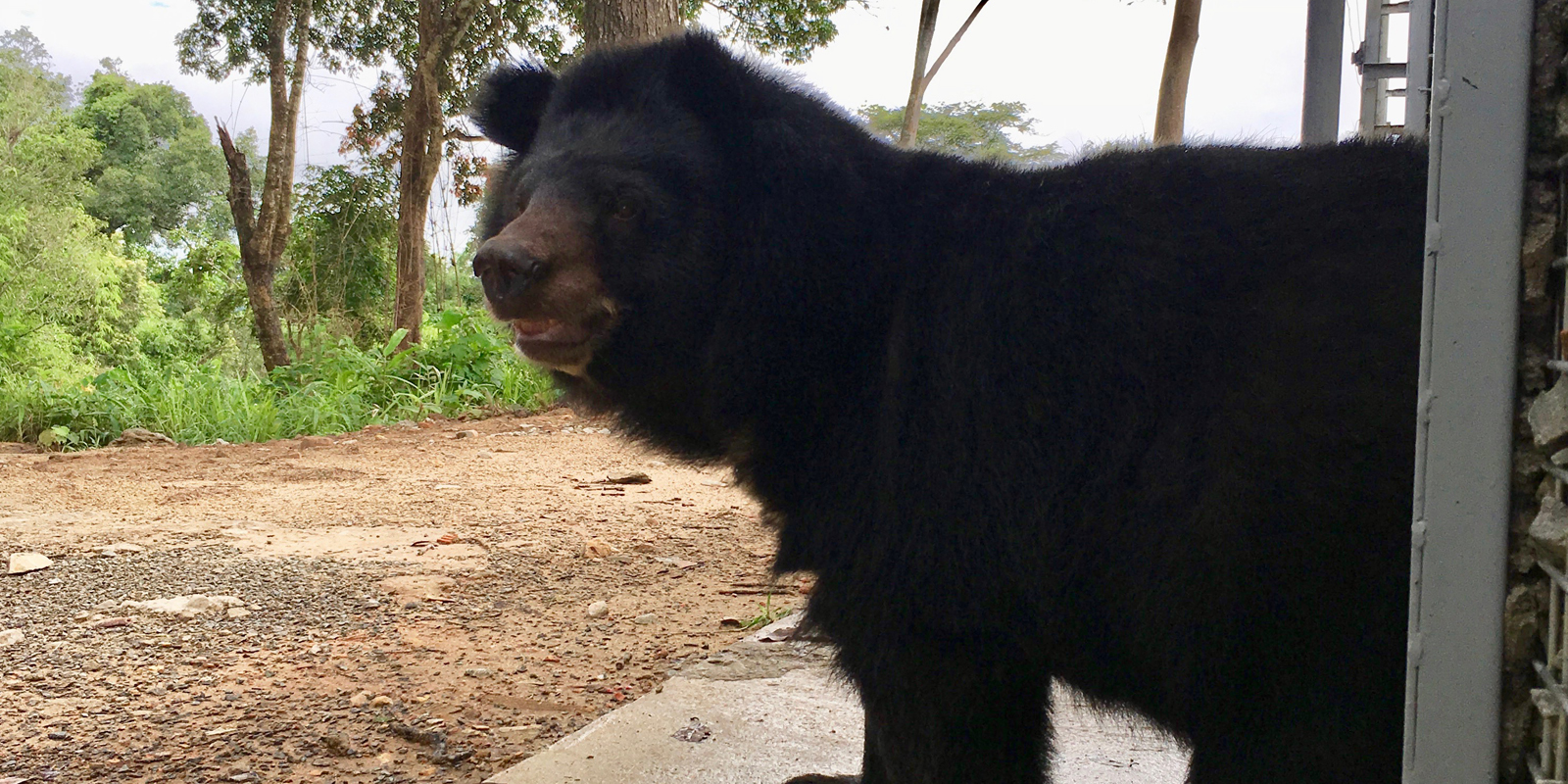 The animals often have chronic diseases as a result of their imprisonment, poor diet and bile extraction. To provide them with appropriate veterinary care, a new veterinary clinic was build. One distinct feature of this clinic is the massive window that separates the surgery room from the briefing room. Through the window, veterinary students and other vets are able to watch the treatments in the surgery without disturbing or endangering the animals.

Solid infrastructure is a requirement for an optimal accommodation

To provide the animals in the rescue centre with the best possible care, all working processes have to be well coordinated and a corresponding infrastructure established. Therefore, we will support our partner in further necessary constructional measures:

The bears in the new rescue centre are meant to have as many opportunities as possible to re-discover and live-out their natural behaviours. The German behaviour biologist Dr. Marion Schneider monitored the animals in the state-run facility and then used her collected data to plan the new facilities. After a period of acclimation for the animals, their behaviour was analysed again. The results of the study show that the type of accommodation the bears live in has indeed measurable effects on stress and well-being of the animals. The study highlights the importance of a large and natural environment for bears in captivity, to ensure that they are able to pursue natural behaviours. From now on, behavioural monitoring will be done every six months to identify changes in behaviour of the bears and enable the response with appropriate enrichment.

Animal welfare education for a long-term change of public perception

Yearly, tens of thousands of people visit the Cát Tiên National Park, located just three hours north of Vietnam’s largest city Ho-Chi-Minh-City. Thanks to the new rescue centre, there is the opportunity to reach a lot of people and educate them on the animals and their needs to reduce the demand for bear bile and its products. Guided tours of the centre are planned twice daily. Aim is to engage visitors actively, for example, by allowing them to add food to enrichment items, and thereby sensitising them to the natural behaviour of the bears and also educating them on the cruelty of bear bile production.

To develop this concept, the staff of Cát Tiên Bear Rescue Centre is conversing with staff members of another rescue centre led by FTB in Cambodia which already offers these type of tours. In addition to this, information material is being developed for distribution among the visitors.

Please support the work of the rescue centre to ensure that not only the nearly 1,000 “bile bears” not rescued yet find a safe home and that through education, the demand for bear bile can be reduced long-term.